How Long Does It Take to Learn SQL?

When it comes to handling databases, there is no language better than structured query language (SQL). SQL is a programming language used to communicate with relational databases, allowing you to quickly modify, create, and remove databases and database elements.

You should consider how long it takes to learn SQL when expanding your career.

Is SQL Hard to Learn?

SQL is a high-level language, which means most of the jargon and the technical aspects of programming are removed, and instead a syntax more legible for humans is used.

For example, in most languages, the logical operators “and” and “or” are represented by the following syntax:

As exemplified, SQL is readable and inherits a lot of its syntax from the English language. This makes it the easiest to read when compared with other languages like C++, Javascript, and even Python.

As a result, for basic queries, you can learn SQL in a span of a few weeks. Although the familiarity with and knowledge of SQL code structure may be easy to obtain, mastering the language is not.

Using SQL and learning it throughout your career is part of the data scientist experience. Mastering SQL may take years, and while mastery is indeed a nice thing to have, it’s not something you must have before tackling your first SQL project.

Moreover, SQL takes a variety of forms across platforms, and these subtle differences may force you to think through a solution differently. Even so, as long as the logic is there, executing and using SQL for your personal and professional projects won’t be too difficult.

How Long Does It Take to Master SQL?

As mentioned earlier, mastering is quite different from learning. “Mastering,” as some people may define it, is a state in which learning has stopped.

No matter how debatable the definition of “mastering” is when it comes to learning SQL, the simple truth is that there is no point at which you will have truly “mastered” the language. While SQL starts with simple queries and syntax, as you progress through harder problems, you will soon realize that mastering SQL is a lifetime experience.

This experience differs for everyone, as detailed in the following examples.

“Learn it as you need it…I’ve been using MS SQL Server for 20 years and Access for about 5 years before that, and I still pull my books and hit Google a lot.”

“There’s no reason to memorize every command; new versions deprecate some commands, and new commands are introduced. Experience is the best, whether it’s writing queries for reports or complex selects between multiple tables. After this, you’ll learn the nuances and tricks to get what you want.”

Another person reported the following:

“I’ve been doing it for more than 10 years. I’d say I became exceptionally proficient in 5. However, you’ll always have something to learn.”

Jay, the founder of Interview Query, felt he mastered SQL once he understood how to write self-joins and could solve 90% of his analytics queries.

For example, if he had a question about funnel analysis or statistics, he would within a minute be able to understand what data he needed to get that and then could continuously write an SQL query to get his answer.

How Do You Measure SQL Proficiency?

Proficiency is relative, and there is no one correct way to measure SQL proficiency. Nevertheless, there are a few different measures you can use to gauge your proficiency.

In this type of measurement, you assess your skills based on how you can execute your goals in your SQL projects. Ask yourself what you’re trying to achieve.

In this form of measurement, you can try to practice SQL interview questions to assess your proficiency. Ask yourself how many questions you solved, how many functions you know, and how fast you can churn out queries.

What Are the Levels of SQL Proficiency?

While there are no definite “levels” for measuring SQL proficiency, there are benchmarks that can help you determine your SQL knowledge.

In this article, we will measure SQL proficiency through the following labels:

To measure your SQL proficiency using skill-based measurement, we have prepared questions that can act as your diagnostic test of your own SQL skill level.

At the beginner level, you should be able to identify basic SQL terminologies and analyze how they work together to create a database architecture.

These questions are mostly theory-based and attempt to test your familiarity with basic SQL concepts. While these are “easy” questions and concepts that a beginner should be able to answer, many still fail in part due to lacking a strong grasp on the fundamentals such as the following:

To test beginner proficiency, you can use the following questions:

A database is a collection of data and is not specifically digital. SQL databases are relational databases that are stored either remotely or locally and can be simple but frequently complex.

2. What Is a DBMS, and How Is It Different From an RDBMS?

An RDBMS is relational due to its ability to define relationships between data, thus allowing for a more insightful view of your data. Moreover, the data is stored in tables contrary to DBMS’ file format.

PIVOT in SQL allows you to shift row-oriented data into column-based data. As it does this, it aggregates data along the way, providing a more straightforward view that showcases crucial information.

You can use the following code to perform pivots:

For data analyst/data scientist to be considered of intermediate SQL proficiency, they must be familiar with certain concepts that allow them to create insightful queries, although not necessarily through the use of in-depth functions and concepts.

These concepts should serve as building blocks for creating complex queries. Those with intermediate SQL proficiency should be able to solve most surface-level issues to relatively complex problems, even if they can’t provide what’s necessarily the best and most efficient solution available.

Such intermediate concepts are:

To test intermediate proficiency, you can use the following questions:

Write a query to get the number of customers that were upsold by purchasing additional products.

Note: If the customer purchased two things on the same day, that does not count as an upsell since they were purchased within a similar timeframe.

2. What Is UNION and How Is It Different From UNION ALL?

UNION is, at its core, UNION ALL with more parameters. For example, given a dataset with two tables, one with an employee names column called ‘name’ and the IDs, accordingly named ‘ID’, and a second with the same employee names but a salary column instead, you can create a UNION to merge the two tables but remove duplicate records.

Ultimately, UNION ALL is faster than UNION but concatenates all the values, whereas UNION can detect relations and duplicates, generating an appropriate table accordingly.

A primary key in SQL is a type of self-induced restriction or constraint that limits the occurrence of a value within a tablet to once only. Moreover, NULL values are not allowed. The primary key constraint combines the NOT NULL and UNIQUE constraints.

You can create a table with a single field as a primary key using the following code:

To enforce a primary key on two fields, do the following:

4. What Are Common SQL Constraints?

Although we have discussed the primary key as a constraint, the family of SQL constraints is extensive, and each constraint serves a specific purpose. The following are common constraints:

5. How Do You Handle Missing or NULL Values in SQL?

Handling missing values in SQL is always a challenge. Improper handling can result in accidental biases that can shift business decisions due to unsound logic.

Before you can master the coding methods to handle missing data, you need to understand the following concepts first:

To find NULL values in your tables, use the following code (through NULL):

Use NOT NULL to utilize reverse logic in handling null values:

It takes more than constant theoretical learning and a lot of practical application to attain SQL mastery. You will also need to be familiar with specific nuances of SQL, and those with this level of proficiency should be able to make queries that are efficient, easy to read, and, most importantly, work without compromising data integrity.

Below is a list of concepts those who have reached SQL mastery should know:

To test your mastery in SQL, you can use the following questions:

Given a users table, write a query to obtain the cumulative number of new users added by the day, with the total reset every month.

2. OLAP vs OLTP: What’s the Difference?

There is a tendency to interchange OLAP and OLTP due to their similar names. Nevertheless, OLAP and OLTP are systems that could be identified as infrastructures with opposite philosophies. OLAP and OLTP are not mutually exclusive but rather work together to create an efficient database architecture.

OLTP involves itself with fast systems, processing transactions, recording, and capturing each detail, with built-in data guards that ensure data integrity. Because OLTP works in a fast-paced nature, it needs to be able to process and store information quickly, and thus, heavy processing is discouraged.

On the other hand, an OLAP utilizes the information from the OLTP system to generate insights that drive business decisions. While OLTP is swift, OLAP, due to its analytics-oriented approach, allows more time to create more accurate insights generated from the data warehouse.

In a fast-paced environment where insights can have rippling side effects on business decisions, it is tempting to time yourself and test how fast you can generate queries. While this can, to a certain extent, be a benchmark for skill, most often, it’s not the speed that matters but the accuracy.

Generally, you can generate simple queries such as those involving basic tables to be joined or pivoting a table in five minutes or less, given that the database is quite limited in size.

However, as a data scientist, it is commonplace to encounter huge 1000-line queries that take considerable effort to generate. Furthermore, the longer your code is, the higher the risk of generating logical errors within your query. As such, it is always essential to ensure that your query is logically sound rather than swiftly produced.

Remember: Data is inherently dangerous to work around. Simple errors can cause bias-influenced results and insights.

Where Can I Learn SQL, and Fast?

Most SQL material is static and is generally hard to follow. Moreover, for those without programming experience, using words to create commands instead of a mouse and a pointer is typically a novel idea and may be difficult to conceptualize.

That being said, for easy-to-understand SQL material that adopts your learning style, Interview Query provides SQL courses that are supported by a huge community that allows for peer discussion and facilitates understanding. Additional interview questions like the ones above are also readily available.

Video: How long does it take to MASTER SQL? 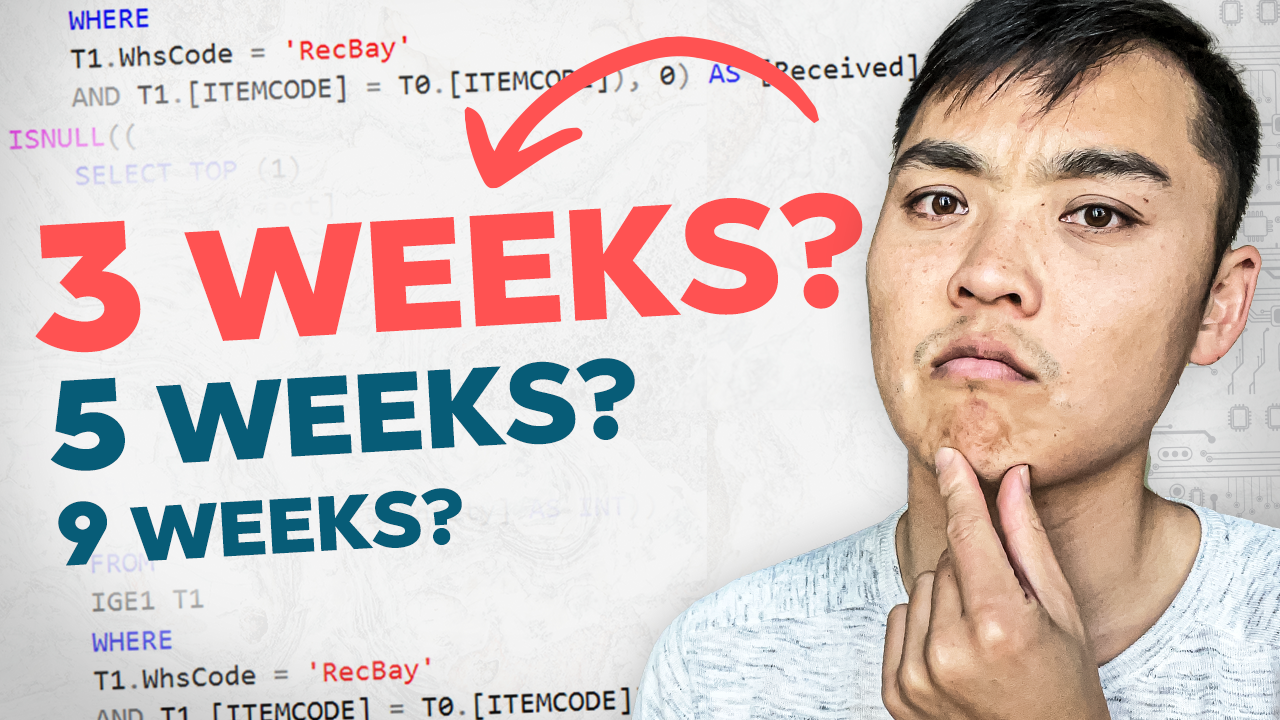